A Study in Heart Rate Variability, Mood and Valence

Northumbria University, 2019. Heart Rate Variability (HRV) is a useful measure of valence in music, that is to say how positive or negative the emotions of the listener are.

A listener highly aroused but with high HRV and therefore high vagal power is like to be happily excited; with low HRV and vagal power they are likely to be angry or distressed. Conversely low arousal and high HRV suggests happily relaxed, low arousal with low HRV, sad or depressed. These measures allow for a non-invasive way of predicting many of the emotional effects of music (not only in relation to vagal power in the autonomic nervous system, but also to synergetic activity in the endocrine system and in neurotransmission). In this study, X-System predicted arousal (Heart Rate) with 100% accuracy and ranking of vagal power (HRV) in three out of four cases. In the fourth case, certain X-System parameters nevertheless pointed clearly towards the correct prediction.

A study into heart rate variability (as an indicator of mood/ valence) conducted in collaboration with Northumbria University showed that X-System predicted the ranking of subjective arousal scores with 100% accuracy.

Six participants listened to four pre-selected pieces; two “happy” (Hey Ya – OutKast and Walking on Sunshine – Katrina & the Waves) and two “sad” (Theme of Harry’s Game – Best of Clannad and Hurt – Johnny Cash), according to internet-sourced popular curations, including (Rolling Stone; Spotify UK; TimeOut-New York; UpVenue) and one self-selected song in a random order whilst ECG data was recorded continuously. A five- minute relaxation period followed each song, after participants were asked to fill a valence questionnaire.

In the cases of both arousal and valence, X-System predictions and subjective rankings correlated with HR and HRV rankings for three out of four songs. The exception is song number 3 (Hurt). Interestingly the X-System linear harmonic cost prediction aligns well with the HRV ranking, especially with the inverse of the time domain marker of vagal activity, SDNN. In addition, 1Hz turbulence, another brainstem-to-amygdala modelling reflecting the equivalent of HRV in moment-by-moment musical expression, predicts an exceptionally strong variability for song 3, Hurt. In spite of its title, ‘Hurt’ may simply not be a “sad” song in the musical neurophysiological sense. 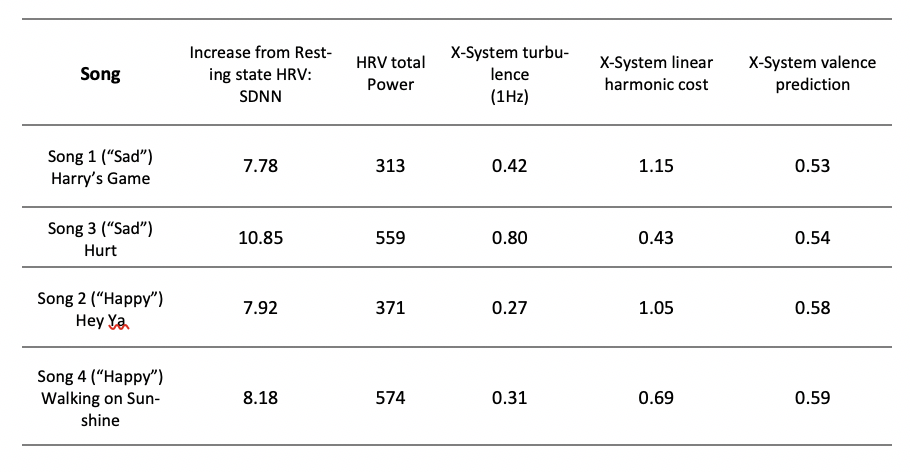 Tamil Nadu, 2018. X-System is designed to be a universal musical tool, capable of predicting neurophysiological responses to music in all cultures.

Tamil Nadu, 2019. In this study, validation of X-System valence predictions was carried out in an RCT, once again, in a non-Western culture.