Queen Mary University, Imperial College, The Royal College of Music 2017. The earliest known reference to entrainment, or mode-locking, of two maintained oscillators is Christiaan Huygens’ description of two pendulum clocks ‘‘falling into synchrony’’ when hung on the same wall (1665).

An important use of entrainment in music is the effect of step-by-step changes in levels of predicted arousal or counterarousal in music on incremental changes in excitement or relaxation in the mind and body: for example, the more relaxing the music becomes step by step, the more parasympathetic tone is generated, and the more the heart slows down. Entrainment is most effective when the music and body begin the process in similar states of arousal or counterarousal.

The study was led by Dr Kat Agres of Queen Mary University and Dr Daisy Fancourt of the Royal College of Music and Imperial College. There were n=60 participants. The experiment included autonomic (Heart Rate), endocrine (cortisol, cortisone, progesterone, testosterone, dehydroepiandrosterone and possibly estradiol) and psychometric measures (STAI). The protocol embraced four conditions – the X and Y conditions below, including arousal and relaxation entrainments in alternate orders, and then the same two conditions without music, which were used as controls.

Unfortunately, full endocrine results were not forthcoming from the laboratories in Germany, but autonomic data show consistently strong evidence for the efficacy of X-System relaxation playlists, and good evidence for the enlivenment playlists. The graphs below show mean HR for the whole relaxation playlist (left), and a comparison of all enlivenment tracks (blue) and all relaxation tracks (red) in absolute order (right). (For entrainment purposes different participants started listening to the lists at different points). There is a significant statistical contrast, F = 10.73, p < 0.001, between mean HRs for tracks 2-4 and 12-14 of the relaxation playlist, i.e. the heart rate at the end of the playlist is significantly lower than at the beginning of the playlist.

The Enlivenment playlist also shows significant contrast between an initial relaxed state and enlivenment in the final tracks, F = 4.881, p < 0.05: 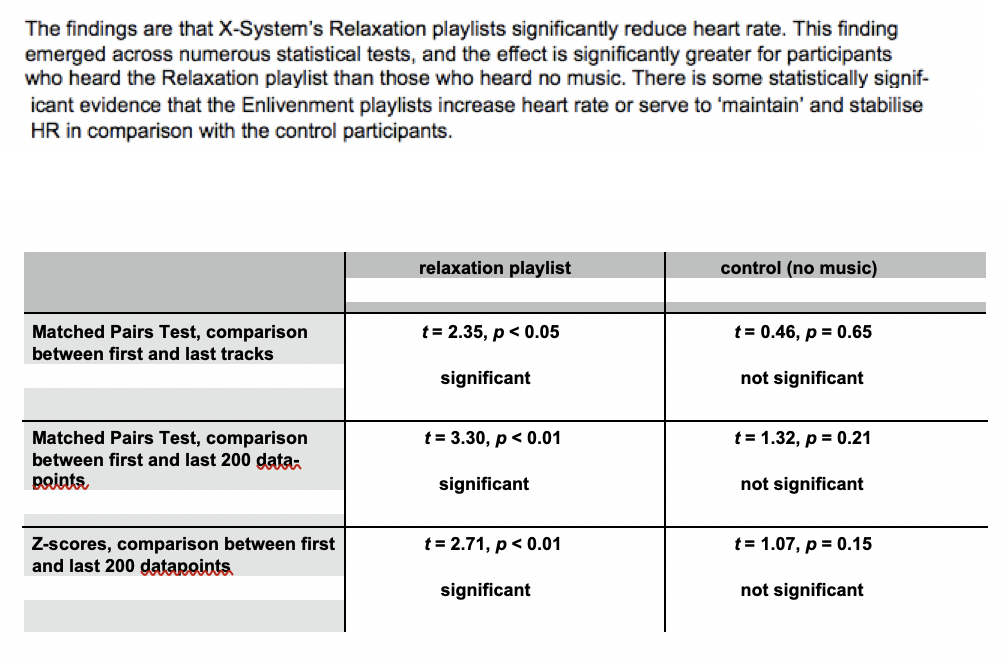 Tamil Nadu, 2019. In this study, validation of X-System valence predictions was carried out in an RCT, once again, in a non-Western culture.

Northumbria University, 2019. Heart Rate Variability (HRV) is a useful measure of valence in music, that is to say how positive or negative the emotions of the listener are.

Tamil Nadu, 2018. X-System is designed to be a universal musical tool, capable of predicting neurophysiological responses to music in all cultures.